You ever cut your grass and found a car.
You own a home that is mobile and 5 cars that aren”t.
You think the stock market has a fence around it.
Your stereo speakers used to belong to the Moonlight Drive-in Theater.
Your mother does not remove the Marlboro from her mouth before telling the state trooper to kiss her ass.
You own more than three shirts with the sleeves cut off.
You”ve ever spray painted your girlfriend”s name on an overpass.
Your boat has not left the drive-way in 15 years.
You think a Volvo is part of a woman”s anatomy.
You own a homemade fur coat.
Chiggers are included on your list of top 5 hygiene concerns.
You burn your yard rather than mow it.
Your wife has ever said, “Come move this transmission so I can take a bath.”
You refer to the time you won a free case of motor oil as “the day my ship came in.”
You read the Auto Trader with a highlight pen.

A young man goes into a drug store to buy condoms. The pharmacist says the condoms come in packs of 3, 9 or 12 and asks which the young man wants. “Well,” he said, “I’ve been seeing this girl for a while and she’s really hot. I want the condoms because I think tonight’s “the” night. We’re having dinner with her parents, and then we’re going out. And I’ve got a feeling I’m gonna get lucky after that. Once she’s had me, she’ll want me all the time, so you’d better give me the 12 pack.” The young man makes his purchase and leaves.

Later that evening, he sits down to dinner with his girlfriend and her parents. He asks if he might give the blessing, and they agree. He begins the prayer, but continues praying for several minutes. The girl leans over and says, “You never told me that you were such a religious person.”

He leans over to her and says, “You never told me that your father is a pharmacist.”

Little Billy came home from school to see the families pet rooster dead in the front yard.
Rigor mortis had set in and it was flat on its back with its legs in the air.
When his Dad came home Billy said, “Dad our roosters dead and his legs are sticking in the air. Why are his legs sticking in the air?”
His father thinking quickly said, “Son, that’s so God can reach down from the clouds and lift the rooster straight up to heaven.”
“Gee Dad that’s great,” said little Billy.
A few days later, when Dad came home from work, Billy rushed out to meet him yelling, “Dad, Dad we almost lost Mom today!” “What do you mean?” said Dad.
“Well Dad, I got home from school early today and went up to your bedroom and there was Mom flat on her back with her legs in the air screaming, “Jesus I’m coming, I’m coming” If it hadn’t of been for Uncle George holding her down we’d have lost her for sure!”

Some interesting and funny bath curtains

Fat kid in the dumpster. I’d just leave him in there.

Chuck Norris does not use spell check. If he happens to misspell a word, Oxford will simply change the actual spelling of it.
Before science was invented it was once believed that autumn occurred when Chuck Norris roundhouse kicked every tree in existence.
In the original pilot for Star Trek Next Generation, Chuck Norris can be seen powering the USS Enterprise warp drive with his roundhouse kicks.
Chuck Norris isn’t lactose intolerant. He just doesn’t put up with lactose’s ****.
Chuck Norris doesn’t eat. Rather he kicks ass until he’s full.
Chuck Norris once threated to sue Burger King because they refused to make it his way. When asked what “his way” detailed, he replied: “with barbed wire and nails, of course”. He then roundhouse kicked the reporter for even asking.
Chuck Norris never “gets laid”, rather: “laid gets Chuck”. 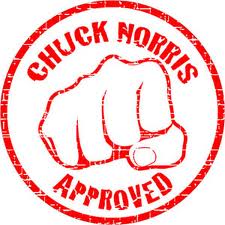 Do you like visiting LaughToDeath? If so why don’t you help promote the site and get your friends and family here so they can enjoy the site as well.

What can you do to help? Like us on facebook so all your friends can see and read about LTD. Tweet about us so your followers can come and take a peek for themselves.

Running up and hitting a sign, what did he think would really happen?

This is why fat people don’t ride skateboards

Fat kid tries to bail off his bike.

Just because they don’t have thumbs don’t mean they can’t open doors.

Well, you’ve always heard cats will land on their feet, but what if they don’t want to use them?